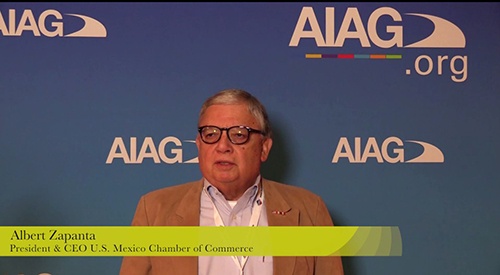 Discussions of reopening the North American Free Trade Agreement have raised concerns for many businesses and industries, but Albert Zapanta, president and CEO of United States-Mexico Chamber of Commerce, urges people not to believe all the hype. “Don’t believe all the political rhetoric — from both sides,” he said. “Political rhetoric isn’t the driving factor. The discussions are much more positive as to how we can relate to each other.”

During an exclusive on-camera interview  at the annual AIAG Supply Chain Summit held June 20, 2017, in Livonia, Michigan, Zapanta shared some of his insights as to how the automotive sector fits into the renewed discussions.

“One of the key areas is the certificate of origin. That goes right to the whole idea of the supply chain since we’re building automobiles as well as other transportation equipment that is moving back and forth across U.S.-Mexico, U.S.-Canada, and across all those borders more than once,” he said. “It’s said an automobile may move five to seven times as far as its assembly and supply chain. So that to me is where our priority ought to be focused on.”

Zapanta said the North American automotive supply chain is not so much underprepared for potential changes to the trade agreement — it needs to adjust to ever-changing times.

“When we did NAFTA — and I was very much a part of that even with Ronald Reagan on the mid-’80s — at the time, energy was not included, internet wasn’t even functioning, and a couple other areas of foreign investment were not included. So it’s really time to update it, to adjust,” he said. “Ninety percent of it is in place, working well. It’s a trillion-dollar marketplace, the largest in the world. It is built upon relationships between our three countries, and we have neighbors that are making it happen.”