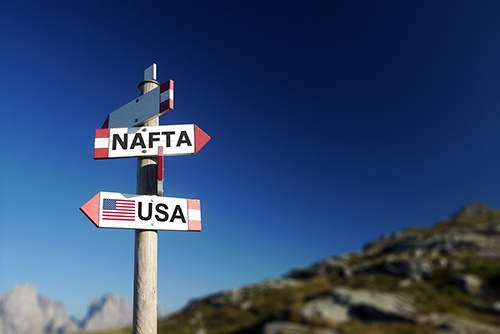 Birgit Matthiesen, director, Canada-U.S. cross border business affairs for Arent Fox LLP, says automotive parts suppliers may not be prepared for the wave of change that is coming at them quickly on the trade policy front. Her comments, made during an exclusive on-camera interview at the annual AIAG Supply Chain Summit held June 20, 2017, in Livonia, Michigan, were not critical — she simply points out that the changes are coming fast, and the industry hasn’t got much time to prepare.

“With this Administration, it is a very obvious, stated objective in trade policy, starting with rewriting NAFTA, that they will measure their success by two things: How much production will be returned to the U.S. and what will be the number of the reduction of the trade imbalance between the U.S. and Mexico, and the U.S. and Canada,” she says.

Matthiesen admits that it sounds like a reasonable objective. “But to get to that objective, you need to change the NAFTA agreement, and Canada and Mexico will come to the negotiating table with their own objectives,” she says. “The doors will be closed on that negotiating room…Who knows what’s going to come out? But whatever comes out will be hugely important to AIAG members.”

Matthiesen presented a talk at the Summit with her colleague David Hamill, a partner in Arent Fox, titled, “Shifting Tides: Election Effects on the Automotive Industry.”

“Everyone has a day job, and trade policy and changes in trade agreements don’t run high on many people’s job summaries,” she says. “We’ve lived under NAFTA for 24 years, and there’s a lot of dust on that rule book…but AIAG members are a very sophisticated group of companies, and they will get ahead of this — it’s just happening very quickly.”

The first step, she told Summit attendees, is to find out who has the data in their companies that can help them determine how dependent their sales and profits are on the current rules, what benefits they are deriving from them, such as import duties and competitive benefits; and how to use the data to determine how their bottom line will be affected if a rule is changed.

“It’s not as easy as it sounds,” she adds.”But you have to decide in-house if the current rules matter to you and how much they matter to you.”