The Paris Deal at 5. Is it Working?

December 12, 2020, marked the fifth anniversary of the Paris Climate Agreement. A Climate Ambition Summit hosted by the UK, France and the UN celebrated the event. Heads of government from around 70 countries made commitments, together with CEOs, mayors and civil society leaders.

Many of us are reflecting on a critical question: Five years on, is the Paris deal working?

First, the deal itself must be understood. It was a bold, unusual and counterintuitive experiment in global collective action among its 194 signatories. Contrary to any textbook advice, it was built around voluntary commitments with no penalties for failing to deliver pledges. How could such a do-as-you-like arrangement ever solve the greatest market failure in history where free rider problems were rife? Surely governments will promise little and deliver even less?

This seeming inconsistency was in fact the genius of the deal. The politics, economics and science were, in 2015, simply not at the stage to deliver a top-down global treaty with obligations and remedies. Rather, the context was just enough to deliver a process by which initial weak commitments would be monitored, reviewed, delivered and (hopefully) ratcheted up every five years. The hypothesis was that with each year that passed, the science would become clearer, technology costs would decline, the economics of a low carbon future would become more compelling, and citizen voices would demand more ambition. 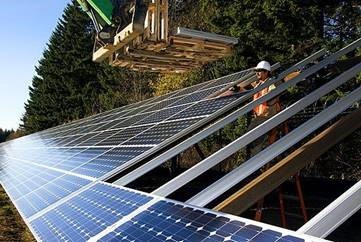 Was the Paris Climate Agreement Realistic?

Was this a realistic hope? It seems so.

In 2020, more than 50 countries committed to achieve net-zero emissions by mid-century, and more than 100 stated they will announce such commitments soon. Since 2015, more than 1,000 companies have signed up to Science-Based Targets, committing to decarbonize throughout their value chains and be transparent in reporting progress. Hundreds of cities are setting net-zero emissions targets, and a growing number of financial institutions are following suit. In September 2020, President Xi Jinping surprised the world by announcing a commitment to reach carbon neutrality by 2060 at the latest. New WRI research shows that bringing these dates forward would be good for China’s economy.

Such commitments would have been quite unthinkable just five years ago.

Why are they doing it? It is because they see the writing on the wall; they know that we are heading towards a decarbonized economy, and smart companies and countries see competitive advantage in getting ahead of the curve. Financial markets, consumers and employees are rewarding them. And plummeting prices for renewable energy, battery storage, electric vehicles, smart grids and remote sensing have transformed decision-making calculus.

So, the direction of travel is clear and positive. But unfortunately, doing better is not the same as doing enough. To limit warming to 1.5 degrees C (2.7 degrees F), the world needs to cut global emissions in half in the 2020s, and half again in the 2030s, and again in the 2040s. A new report from WRI and ClimateWorks Foundation finds that to get on track for the emission cuts required by 2030, the world must accelerate the pace of adoption of renewable energy six-fold, coal phase-out five-fold, and electric vehicle uptake 22-fold compared to current rates. When it comes to addressing deforestation and curbing emissions from agriculture, the situation has sadly been getting worse, not better. We need to make a U-turn, and fast.

We’re also far behind on areas of finance and adaptation. While progress on integrating climate risk and return into financial markets has been much more impressive than anticipated — thanks to the Task Force on Climate Related Financial Disclosure (TCFD) and other initiatives — progress on international support for developing countries has been weak. It must be addressed much more vigorously if trust is to be built and the next UN climate summit (COP26) in 2021 is to be successful.

So too, while adaptation has risen rapidly on the political agenda — thanks in part to the Global Commission on Adaptation — financing for resilience remains overall at only about 25% of all climate finance.

The impressive commitments to net zero by mid-century now need to be brought down to Earth by specific plans for the 2020s — countries so-called “nationally determined contributions,” or NDCs. After the Climate Ambition Summit, around a quarter of countries have announced their new commitments, with about half of them showing real improvements in ambition. This is not enough. Raising ambition in this decisive decade is the big challenge for the coming months.

As we look forward to the coming 12 months to COP26 in Glasgow, there are five shifts that give us hope that the coming decade could represent a tipping point:

The Darkest Hour Is Just Before Dawn?

We are nearing the end of a dreadful year. Infections and deaths from the pandemic are at an all-time high. So, too, the impact of climate change has been more evident this year through fires, storms, droughts and floods.

There is no vaccine for climate change. But just as we will likely emerge from the pandemic later this year, so, too, there may be an inflection point on climate action.

At WRI, we believe that such an inflection point is a real possibility and are committed to work very hard to help tip the scales. On behalf of my colleagues across WRI’s global network, I pledge to redouble our efforts, providing rigorous, solutions-oriented research, data and analysis, and joining and shaping innovative coalitions for rapid, systemic change. If you have advice or suggestions for WRI, or ideas on how we can work together, I look forward to hearing from you.

Dr. Andrew Steer is president and CEO of the World Resources Institute.